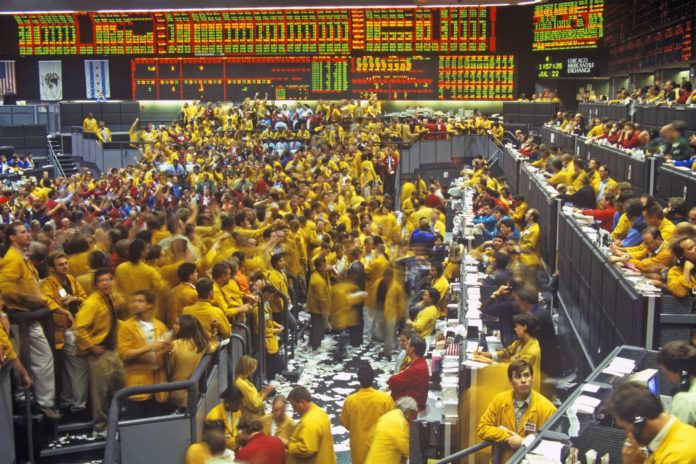 Bitcoin exploded in 2017. There’s no doubt about it.

Chloe Cornish explains at the Financial Times that there are currently around 40 digital currencies with market caps exceeding $1 billion, but Bitcoin is hands down the most popular and owns roughly a third of the cryptocurrency market.

Bitcoin has also witnessed an immense amount of change in a just short period of time. In keeping with its rapid evolution, Bitcoin futures recently arrived on US stock exchanges, which CNBC’s Evelyn Cheng reports officially launched on December 18, 2017.

This created a lot of speculation as to what the outcome would be. What impact would it have on bitcoin prices? How would it affect the overall crypto market?

Now that we have a fairly good sample size, here’s what we’ve learned about Bitcoin futures trading.

As you might expect, Bitcoin prices surged around the time of the futures launch.

Ryan Browne explains at CNBC that just a minute before the futures contracts, Bitcoin’s price soared by more than $1,000 within the first 10 minutes of trading.

A quick look at CoinDesk’s Bitcoin Price Index, and you can tell that bitcoin value reached an all time high of $19,343.04 on December 16, 2017. Bitcoin started the month around the $10,000 mark, so there was a clear correlation between the launch of futures trading and a spike in the price of bitcoin.

However, the glory was short-lived. Just a month later, on January 16, 2018, the price of a Bitcoin had dropped to around $11,000 — shedding just about all of the gains investors enjoyed from the launch of futures trading.

As Jamie Redman writes in Bitcoin News, futures brought with it a certain amount of hype, but the euphoria wore off pretty quickly. In the wake of futures, markets began a bearish crawl downward for a time.

This was concerning for many who were banking on Bitcoin and temporarily created a climate of pessimism.

At the time of writing, 1 BTC is trading for around $10,000 — right back where we were at the beginning of December.

That’s not a bad thing, either.

The December bubble aside, cryptocurrencies have sustained the values built up over fall 2017.

There’s just one problem: Ever-shifting public sentiment create an inherent climate of volatility, not just with bitcoin but with cryptocurrency in general. Something as simple as a single negative press story from the right publication can send a coin’s value plummeting. And this volatility was abundantly clear over the past few months with Bitcoin’s highs and lows.

But now that there has been some time for the dust to settle, it appears that Bitcoin futures have reduced the overall volatility (at least in the long-term).

As Chrisjan Pauw points out at Cointelegraph, futures are largely a risk management tool, often used to minimize the risk of changing prices. As a result, this is good news for those who are concerned with the risks that have come along with trading Bitcoin up until this point.

Michelle Fox concurs and references former market regulator Bart Chilton at CNBC, where he says futures will add a safety net and could be a key factor in stabilizing cryptocurrencies.

This isn’t to say that all turbulence has ceased — that won’t happen anytime soon. But it should create far more more stability in 2018 then there was in previous years.

So, it’s likely that the level of volatility that’s been so common with Bitcoin (and cryptocurrency in general) will steadily diminish as this form of currency becomes more mainstream.

They Have Sparked a Deeper Interest in Cryptocurrency

Pauw makes another good point that people who were reluctant to invest in Bitcoin because of the lack of regulation can now invest with far greater confidence. He also mentions that this has helped open up the Bitcoin market to a wider investor base — even in countries where Bitcoin trading has been banned.

In turn, this has resulted in a growing interest in cryptocurrency as a whole and one that extends beyond just Bitcoin.

David Kariuki at Cryptomorrow adds that futures contracts helped spread the word about digital currencies to more people in the banking world, thus increasing the usage of cryptocurrencies.

With digital currencies being viewed as increasingly lucrative and less volatile, it only makes sense that the interest level would grow.

They Have Led to Greater Collective Optimism

At the beginning of March, Wilma Woo wrote at Bitcoinist that Bitcoin is making a bullish future for itself with “signs pointing moonwards.” She mentions that although prices declined an equivalent of 70 percent from all-time highs of nearly $20,000, the month of February has turned the situation on its head.

The rise, fall and recovery of Bitcoin prices have shown that cryptocurrency is here to stay, and we’re seeing a big wave of new crypto enthusiasts who are eagerly jumping on board.

Julio Gil-Pulgar, also at Bitcoinist, presents a case in point of this phenomenon explaining that the U.S. Commodity Futures Trading Commision (CFTC) is now allowing its employees to trade Bitcoin. He references CFTC Chairman J. Christopher Giancarlo, who said that Bitcoin can no longer be ignored and cryptocurrencies present some major opportunities.

This collective optimism is also evident by the sheer volume of people who are becoming Bitcoin traders. Tyler Durden at Zero Hedge points out that Coinbase added 100,000 Bitcoin traders in a single day on November 1, 2017 — well before the launch of futures.

The Bitcoin News team offers some additional perspective: There are an average of Bitcoin 12,000 transactions every hour and 99,000 Bitcoins sent per hour. Not only that, there are 80,000 Bitcoin-related tweets sent each day, which is tangible proof of just how much people are talking about it.

Combine that with multiple Bitcoin/cryptocurrency documentaries that have been recently created, and it’s clear that Bitcoin is a major topic of conversation in the world’s global water cooler.

Futures Could Spread to Other Digital Currencies

Shoshanna Delventhal at Investopedia predicts that 2018 will be the year cryptocurrencies become more accessible to retail consumers—making the prices more stable.

What’s more, Nick Baker writes at Bloomberg that futures for other cryptocurrencies besides Bitcoin could definitely be on the horizon. Baker adds that recent enhancements have been made to the Cboe futures exchange have resulted in more than an 80 percent reduction in latency, meaning traders can get their orders completed more quickly, which is something that’s appealing to high-frequency traders.

Although there’s nothing in the works as of yet, it’s reasonable to assume that futures could spread to other digital currencies in the fairly near future.

It’s been a whirlwind year for Bitcoin. The past six months in particular have been especially turbulent. Bitcoin futures have no doubt added a new dimension to the cryptocurrency market and have helped bring it further into the mainstream.

Futures were the impetus for an epic rise in Bitcoin prices. However, once the euphoria wore off, prices proceeded to plummet.

But now that the dust has settled, we can view Bitcoin with a bit more objectivity. Although there’s still an element of volatility, Bitcoin has definitely stabilized and the future looks fairly promising.